The Soils of Dutchess County 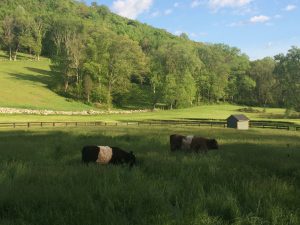 During our class trip to Wingdale, New York last week, Josh Viertel emphasized the importance of understanding the history of the land in order to work towards a holistic management approach.  Wingdale falls within Dutchess County in southeastern New York, and through the woods on Josh’s property lies the Connecticut border.  The property that Josh oversees is comprised of 264 acres that range from pastureland to wooded forest to river.  Each of these presents a diverse microbiome within the broader ecosystem.  Soil is a critical part of each of these landscapes, whether they are food producing or grazing land.

Soils are referred to based on their texture, parent material, depth of development and their drainage characteristics.  Jeff Walker, Ed Hoxsie and Peter Groffman discuss the soils of Wingdale and the surrounding area in the chapter of the Natural Resources Inventory of Dutchess County titled, “The Soils of Dutchess County.”  Broadly, the texture of soils can be split up into three different categories; clay, silt and sand (Walker et al. 2010).  Clay makes up the smallest particles of less than .002mm in diameter, silt in the middle ranging from .002 to .05mm diameter, and sand representing the largest particles of .05mm to 2mm in diameter.  Dutchess County is largely comprised of silty loam and loam.  This means the soil is roughly 25% clay while the other 75% is made up of equal proportions of sand and silt.  Loam is considered the most desirable soil texture as its mix of textures has the ability to be well aerated as well as retain water.

The geologic parent material for soils of Dutchess County has a history that dates back over one and a half billion years and embodies glaciation, the formation of mountains and tidal patterns.  All of these forces combined with the external forces of weather and human interactions have shaped the topography of the region.  Most parent materials in the county are glacially-derived sediments.  These deposits can be split into three main categories depending on their origin.  Glaciolacustrine deposits are fine grain and deposited in lakes while glaciofluvial are coarser grained deposits from melting glaciers draining into streams.  The other category of deposits is a glacial till of sediments directly from a glacier.  With regard to topography of the area, ridges of bedrock are covered with sediment remains of glacial till while valleys are more likely to have lacustrine or fluvial sediments.  Josh’s property is unique in that it is bounded by the hill and forest, and has a steep slope down to the valley and the Ten Mile River.  It is likely that combinations of these sediments are present at different areas of the property due to the variation of elevation.

The steepness of the slope can also affect the nature of the soil that is formed.  On a steep slope gravity transports parent material downhill before the soil can fully develop.  One steep hillside on Josh’s land is bound by a retaining wall near the bottom, and a within a couple feet of the stone wall, fertile grass grows that is not found anywhere else on the hillside.  This is an example of nutrients in the topsoil running downhill and collecting near the retaining wall, and it is easy to characterize how this could happen with parent material as well.

Human influence on the land in the form of agriculture, logging and development has negatively impacted the development of the soils in the county.  Additionally, natural processes such as wind and water erosion can impact the soils.  Erosion and deposition go hand in hand as parent material evolves from erosion deposits (Muckel 2004).  Yet the loss of surface soil at a quicker rate than the build up of parent material is classified as accelerated erosion.  Topography can also impact these natural processes, but it is more likely that accelerated erosion is caused by human activity (Muckel 2004).

In the 1990’s, the USDA categorized the soils of southern New York as “weakly development soils,” otherwise known as belonging to the “inceptisol” order.  Although no single soil series covers a large part of the county, a silty loam textures dominate the soils of Dutchess County.  Navigating through the online National Resource Conservation Service (NRCS) Web Soil Survey, I was able to zoom into Josh’s farm on the map.  It is important to note that this scale is not in line with the scale of the collected soil data, but I was still able to receive a rough soil profile.  In my selected area of pastureland, forest and a bit of the river, around 13.5% of my selected area was identified as Charlton loam, while another 12.4% was identified as Charlton-Chatfield complex.  A typical profile of both Charlton loam and Charlton-Chatfield complex is loam transitioning into gravelly loam with depth.  These classifications also relate to hilly and rocky terrain that characterizes much of the hillside of Josh’s pastureland. 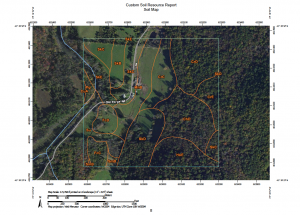