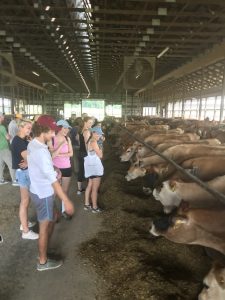 In the United States, one of the first songs children learn either at home or in pre-school is “Old McDonald.” In the song, two to six-year-old children remember all the animals on a farm and act out the sounds they make. Think about it, three-year old’s already know that cows, chickens, and pigs belong on a farm from that song. In “The Itsy Bitsy Spider” they learn how spiders move and can get washed out with the rain. From Bugs Bunny they learn that rabbits eat carrots and from nursery rhymes, they learn that maybe a cow can jump over a moon. Most of the children’s books we share with our kids have animals as their central characters. In fact pigs, cats, bears, horses, cows, dogs, wolves, elephants and more, factor into children’s storytelling time all over the world. I always thought we were introduced as children to the natural world to better understand ourselves and the world we are a part of. But then for some reason, a disconnect happens and our association of the natural world is severed. Our children begin their lives learning about life from farm animals. As children mature, farms and animals are taken over by best friends, sports, and pop culture. It’s as if farms have nothing to do with them once they’re eight years old. How those animals on Old McDonald’s farm are raised, affects all of us. But unfortunately, some politicians like to think only the economy of farming affects citizens not the science of farming.

In the children’s book EVERYONE POOPS by Taro Gomi (1993), all living things are shown to have waste, just like the reader does. But when this poop, er waste from cows, chickens, and pigs gets into the streams or rivers they are near, they contribute high levels of ammonium and nitrates. Concentrated Animal Feeding Operations (CAFOs) house thousands of animals in a confined space near populated areas (Hollenbeck, 2015). In pig and chicken CAFOs the soil in the surrounding land is contaminated by their waste. What happens to this soil? Can it be used for anything? As soil is central to agriculture, water is central to survival. Well, these chemicals are also found in the groundwater (Mallin et al., 2015). Some of the medicines given to them are later ingested by people who slowly become immune to the same antibiotics that were ingested by the animal. Whatever the cow, sheep, and chicken eat, people eat. And however they are pastured, freely grazing or enclosed, affects the soil. It is no longer just an economic issue for farmers to raise their heads as they see fit and can afford. The seas we swim in and the atmosphere have to be protected from the waste that runs off farms. Are farmers going to do that on their own? Some will and some won’t. The size and cost of running the huge agricultural farms in the Midwest prohibit those farmers from making the changes necessary to limit the damage made to the earth. Maybe Old McDonald needs us to remember him again and perhaps support him as he or she makes the necessary and expensive changes necessary to keep the world we all live in healthier for all of us. If that isn’t political, I don’t know what is.