The Largest Lake in the Middle East Has Nearly Disappeared

Imagine a body of water 15% bigger than Utah’s Great Salt Lake nearly disappearing from the earth. Now, no longer imagine, but see it for yourself: 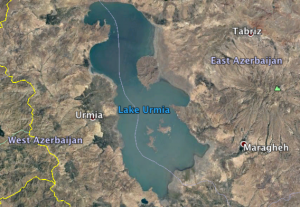 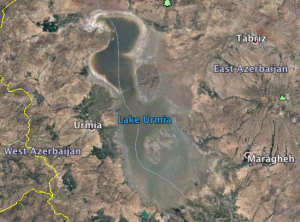 Snapshots from Google Earth ® timeline. The top picture shows Lake Urmia in December 1999. The bottom shows what remains of the lake in December 2016.

Lake Urmia was the largest lake in the Middle East, the sixth largest body of salt water in the world, and in less than two decades has shrunk to less than 10% of its original size (Moghaddasi, 2017). What used to be a regional hub for tourism, resorts, abundant wildlife, and native peoples has become a desolate land of salt-cracked earth.

The initial question – of course – is how did this happen? The answer depends on who you ask, but the varying reasons are not mutually exclusive. Prior to 1979 the surrounding regions of Lake Urmia was a center for grape growing and winemaking. After the Islamic Revolution of 1979, wine was banished, and the demand for grapes did too. Scrambling for a new source of income, farmers laid seeds of sunflower, sugar beets, wheat and apples – all crops that require significantly more water than grapes; “to slake that thirst, authorities dammed local rivers for irrigation. . . and water-intensive crops quadrupled, if not more, water consumption in the region” (Stone, 2015).

Crop replacements can’t account for all the erosion of Lake Urmia. Today, it’s recognized that “development projects” across the country of Iran have been the most lethal actions toward eroding the lake’s once 2,000 square miles of surface area. To quantify this impact, consider that “the three rivers that supply nearly 90% of the water flowing into Urmia have all been dammed for irrigation and hydropower” (Stone, 2015). While research done prior to this write-up has been in no way exhaustive, it’s interesting to note how difficult it is to find a study expounding on the exact details of these developmental projects, leaving scientists and citizens scratching their heads wondering at what expense this lake was lost for. Though not conclusively determinative, it is interesting to note much of Lake Urmia’s fading occurred parallel with Iranian ambitions to weaponize nuclear energy – a program which U.S. intelligence agencies date to beginning in the early 2000s. Nevertheless, future studies should attempt to unveil the hard-to-trace development projects responsible for stripping the earth of its sixth largest saltwater lake.

The reasons for environmental changes are multifarious, as are reasons to combat it too. In the Middle East, where water is already scarce, allowing Lake Urmia to nearly disappear is dangerous not just for the security of Iran, but the region as well. As U.S.-Iran relations enter a four-decade high for amount of interactivity – beginning the Joint Comprehensive Plan of Action in 2015 – Iran will see responsibility and global opportunities arise for their government and businesses on the world stage. Ensuring Iran can maintain the diverse demands of the global workforce demands Iran to have a diverse set of industries – which often correlate to local natural resources. Oil is not enough. Maintaining diverse workplaces, like diverse natural habitats, ensures nations are resilient to changes in the marketplace and political fields. Salvaging Lake Urmia is more than an environmental issue, it’s an issue directly related to ensuring peace in the Middle East.

Certainly, actions have been taken to preserve the lake. To this day, the Rouhani administration credits policy changes they’ve made with salvaging the lake to the percentage it remains at today (Mehr News); yet it’s also under the Rouhani administration the lake has disappeared the most. The looming question remains however, can Lake Urmia be saved? More than that, can the lake be restored to its original size? This year 10,000 flamingoes returned to the lake and have stayed through the summer (Tehran Times), in lieu of migrating elsewhere. It’s an unusual occurrence, one that sheds a bit of hope that the lake can, and under the right policies will, be restored.

Snapshots from Google Earth ® timeline. The picture on the left shows Lake Urmia in December 1999. The right shows what remains of the lake in December 2016.