The Multi-sided Coin of Mandating Sustainable Food Choices in Schools 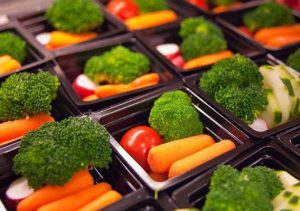 It is widely recognized that food production and consumption has a profound impact on the environment and other socio-cultural and economic domains. Agriculture accounts for about one third of global greenhouse gas (GHG) emissions—more than all modes of transportation combined, having increased 14% since 2001 (FAO, 2014)—in addition to myriad negative ecological externalities, such as nutrient run-off, eutrophication, biodiversity loss, and habitat destruction (FAO, 2003).

Consider, too, the major public health epidemics that our troubled food system incites—most of which are inextricable from unsustainable environmental practices. Many non-communicable and infectious diseases, such as cancers and chronic obstructive pulmonary disorder (COPD), for example, can be traced to poor air and water quality in areas with intensive agriculture or animal husbandry (FAO, 2003); there is also a growing amount of evidence demonstrating the harmful effects of agrochemicals and antibiotics on human health.
In terms of consumption, our world faces a dual-epidemic of obesity and malnourishment at a rate of approximately 2:1 billion (overweight to undernourished), which can exist simultaneously in one individual (WHO, 2014). According to the 2010 Global Burden of Disease Study report, diet was the main cause of American mortality and morbidity (i.e. percent contributed to risk-attributable disability-adjusted life years [DALYs]—the top risk factors being poor diet (14%), obesity (11%), smoking (11%), and high blood pressure (8%) (Murray et al, 2013).

But not everyone is equally affected by our unsustainable food system: Intensive food operations are often governmentally deregulated and disproportionately located in areas populated by marginalized groups, such as people of color or those of low socioeconomic status, which gives little opportunity for community resistance (Lombardini and Lankoski, 2013). Similarly, these areas often have the highest rates of diet-related disease and are dubbed ‘food deserts’ for their dearth of healthy food options or ‘food swamps’ given the often simultaneous inundation of highly processed junk foods; however, farmer and activist Karen Washington would argue there is nothing naturalistic about these phenomena and thus advocates for the language of ‘food apartheid’ to drive real systemic change.

Perhaps the most disenfranchised victims of our food system and unsustainable environmental practices are young people, who will inherit and injured planet ripe with environmental destruction, disease, and natural disasters. For instance, GHG emissions from agriculture, forestry, and fisheries have nearly doubled over the past fifty years and are projected to increase an additional 30% by 2050 (FAO, 2014). Between approximately 1998 and 2030, meat consumption is projected to rise from 25.5 kg to 37 kg per person in developing countries, compared with 88 kg to 100kg in industrialized countries (FAO, 2003). Young people also have some of the highest and fastest growing rates of obesity, reaching numbers like 44%, 38%, and 30% in Greece, Italy, and the United States, respectively (OECD, 2014), while in the same year, 206 million children were either stunted (low height-per-age) or wasted (low weight-per-age) worldwide due to food insecurity (WHO, 2014).

In contrast to older age groups, children and young adults generally have less autonomy over what and where they eat, which makes them extremely susceptible to their food environments. For many youths, schools and educational institutions are the main source of their daily calories and nutrition, as well as the primary wellspring for exposure to new foods or education about health, nutrition, the environment, and sustainability. School lunches can, therefore, be considered major leverage-point in the global food system, which means they have the potential to improve global health and equity by creating a significant ‘domino effect’ in the industrial food system supply chain. In addition to schools’ sway on supply and demand, changing food policy in schools directly influences the diets, health, and consumption habits of future generations—the very lives that are faced with the impending consequences of unsustainable agriculture in the face of climate change.

Shifts in school food policies can also help to shape mainstream culture and fortify new sustainable interventions at the legislative level. To this point, the Escola Sustentável (Sustainable School) project in Brazil—wherein four northeastern cities have committed to transitioning all public schools cafeterias to 100% plant-based by the end of 2019—has gained significant media attention and policy stir worldwide (Humane Society International, 2018). Reducing overall meat consumption among Brazil’s younger generation is especially important given that the country’s meat consumption per capita is over three-quarters the level of industrial countries (FAO, 2003).

Even without legislation, simply encouraging more sustainable practices in schools—such as the incorporation of food studies in existing academic subjects beyond the cafeteria—can be an influential mechanism to change the habits of students’ parents and siblings, wherein family households are significant consumers in the global food retail economy (Lombardini and Lankoski, 2013). Unsurprisingly, level of education is linked to risk of obesity: According to a 2017 Obesity Report conducted by the OECD, less-educated women are two to three times more likely to be overweight than those with a higher level of education among the countries surveyed worldwide.

Fortunately, the most healthful foods are often the most sustainable—known as the ‘Double Pyramid’ of health and environment. According to 2010 study in the Florida Public Health Review, plant-based options are low in total and saturated fat, high in fiber, and are cholesterol-free, which may help schools better meet USDA nutrient standards (Eckhart et al., 2010) while simultaneously reducing the environmental footprints of our diet (e.g. carbon and water lifecycles) and potentially reducing food procurement costs (Lombardini and Lankoski, 2013). However, because there is no guarantee that students will actually be willing to eat more vegetarian or vegan foods (Eckhart et al., 2010), this may result in unintended hunger or food waste—a two-sided coin of mandating sustainable food choices in schools.

But who’s to decide what a child should eat in a day, what the most sustainable diet is, or what the best mechanism for enforcement of sustainable food policy is? In 2012, Finnish researchers investigated the intended and unintended effects of the mandatory “vegetarian day” in Helsinki schools—a popular intervention also known as “Meatless Mondays.” These schools had adopted a forced choice restriction model by mandating a vegetarian day, and although this increased healthy and sustainable dietary patterns, researchers also found evidence of “psychological reactance, hedonic dislike, and non-compliance” on these days (Lombardini and Lankoski, 2013).

Their research encapsulated varied time scales (i.e. short, medium, and long-term) wherein different patterns emerged. In the short term, there were clear signs of non-compliance on vegetarian days, which manifested as a decrease in school lunch participation, as well as a decrease in the amount of food added to one’s plate. Paradoxically, this also led to an increase in food waste; notably, the clearest evidence of this non-compliance was seen in elementary schools (Lombardini and Lankoski, 2013). This evidence suggests that isolated “vegetarian days” may not be the most effective way to encourage healthy and sustainable eating patterns among youth; schools would be better served by a more integrative model or gradual approach to these interventions.

The 1998 Cookshop study from Columbia University Teachers College is a seminal example of an integrative model to school lunch reform and nutrition education. The researchers showed that incorporating hands-on “food and environment” education via science classes, cooking workshops, and community gardening increased the healthfulness and diversity of student choices and cafeteria offerings (Liquori et al., 1998). More recently, Eckhart et al. (2010) employed a gradual and holistic introduction of plant-based items into the school food environment and found that schoolchildren are willing to purchase vegan options offered in the school buffet. Over their month-long study in demographically diverse school districts, vegan items were offered once per week in elementary and middle school cafeterias. Researchers tracked menu items sold, nutrients of menu items offered, and ease of vegan item preparation for school kitchen staff and found that vegan options accounted for more than half of the average number of meals sold at each school during study days.

Additionally, food service managers indicated that vegan menu items were easier to prepare (Eckhart et al., 2010). This indicator—the ease at which school lunch can be prepared on-site—is an increasingly important metric, as more schools no longer house full-capacity kitchens. Incorporating robust kitchen facilities would also help to ‘close the loop’ of the school lunch supply-chains and potentially lead to more control over the sustainability of food distribution, processing, cooking, consumption, and waste. Overall, Eckhart et al. (2010) found that serving vegan school lunches on a regular basis may help foodservice directors meet nutrient standards and improve child nutrition; however as Lombardini and Lankoski (2013) point out: “Forced choice restriction should be accompanied by detailed data collection to understand the possible causes of intended and unintended effects and to tailor the intervention to the target group.”

To combat the hedonic dislike in this young demographic ripe with “picky eaters, ” Lombardini and Lankoski (2010) suggest prioritizing menu development (or better yet, menu co-development) and “moral suasion and information campaigns where noncompliance stems from a disagreement with the objectives and effectiveness of the intervention.” Given the complex, transdisciplinary nature of food systems, however, this type of education would likely be the most efficacious when intertwined with existing academic or extracurricular activities, such as science class or school gardening.

All things considered, school lunches are a promising leverage-point for reforming inequities in our global food system, lessening the environmental impact of intensive agriculture, and preventing disease through the creation healthy, accessible, and culturally resonant food environments.

WHO, 2014. Double burden of malnutrition. http://www.who.int/nutrition/double-burden-malnutrition/en/