Enjoying That Spicy Tuna Roll? It May be the Last One You Eat 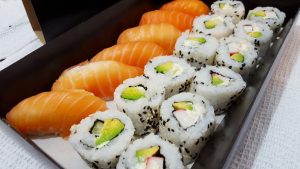 It’s easy to understand the appeal of eating tuna. It’s a large fish, catching it feels like we’re one step closer to taming the ocean. It has beautifully colored flesh, and it can have a spectacular taste and texture when eaten fresh. So taking all of this into consideration, it’s easy to understand why we may not see tuna in our oceans in a few short years.

Many Americans might imagine that the tuna problem lies solely in the Pacific Ocean, however, Bluefin tuna used to be found abundantly in both the Atlantic and Pacific oceans, until it started to become overfished. Nowadays, finding a beautiful, fully grown, healthy Bluefin tuna in any ocean is a rare treat. Some might be quick to point fingers at certain cultures, and yes it’s true, the current tuna craze did start in Japan in the 1980’s (Fromentin et al., 2014). However, Western nations that love so much to draw inspiration from other cultures have put the final nail in the tuna’s coffin (Fromentin et al., 2014). For quite a while, tuna was caught and used in Mediterranean cultures, Spain especially adored the fish, but before 1980 it was hardly seen as a coveted ingredient (Fromentin et al., 2014).

We would expect that such rapid demand for a species, especially in a modern era with plenty of technology to monitor the species, would cause scientists to try and stop the overfishing of the species, and they did.

According to an article by D. G. Webster, written in 2011, the International Commission for the Conservation of Atlantic Tuna, or ICCAT, “consistently ignored the advice of their scientists regarding this species”. While scientists urged ICCAT to implement restrictions on harvests, the organization recommended the measure but failed to do anything to implement it, which led to catchment levels of over 50,000 metric tons in 1994 (Webster, 2011). It wasn’t until 2010, when ICCAT and scientists finally were on the same page about catchment levels, recommending that they hover just below 15,000 metric tons (Webster, 2011). However, it is quite plausible that the actual amount of tuna caught and the reported amount vary significantly, as Atlantic Bluefin are frequently caught in international waters, setting up a jurisdictional nightmare (Fromentin et al., 2014).

So, is it too little too late? Will we ever enjoy our spicy tuna rolls again without feeling crushing guilt for what we’ve done to this species, or will we even enjoy another tuna roll again?

The bad news is that we should be feeling guilty. The current environment for food crazes to go wild means that demand for products will rise hugely, and social media definitely isn’t helping the tuna out. The faster these trends and ideas spread, the faster the demand increases, and the less likely we are to think about our impact before we take a bite of our food.

Recently, I read “The Third Plate” by Dan Barber, a well-known chef and advocate for more sustainable eating and farming practices. In his book, he discusses an experience of serving Bluefin tuna at his restaurant, Blue Hill at Stone Barns, to a well-known food critic, who questions his choice as the restaurant loves to parade their emphasis of “farm to table” eating. He then prompts himself to investigate Bluefin more, even taking a trip to a small coastal town in Spain that has been fishing tuna by the same method for hundreds, if not, thousands of years. Their practice was, and would still be sustainable, had large fisheries not depleted the stocks of fish so rapidly over the past 30+ years. The town, like so many other towns built on finite resources, is going under.

I, like many other people, like to believe that the way we eat isn’t bad for the environment. I can’t remember the last time I had tuna sushi, frankly, I lost my taste for it as I noticed the quality decreased over my lifetime. However, I doubt that many of us truly understand how the things we put in our mouths affect the world, and how our choices affect the world. I’m not saying we are villains for enjoying tuna, I have and hopefully I will again, but we have eaten this species to the brink and unless we lose our taste for it, we won’t eat it again.