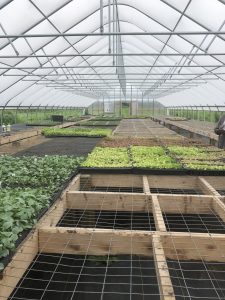 Along with the rise of food labels and certifications such as USDA Organic and Free Range has come a push for reporting the carbon emissions of food on packages. The idea is that in announcing the footprint of each food item, consumers will make more sustainable food choices and help to change a broken food system. However, it is unclear if we can really escape the industrial food complex which is wrapped up in the fossil fuel system.

A study by Matthew J. Mariola (2008) examines the reach of the industrial complex, specifically looking at local food. He argues that there are four assumptions consumers make about local food and energy use: (i) the connection between a food system and energy use is usually made only in reference to the fuel consumed during transportation, not the fuel embodied in the vehicles themselves or the energy consumed by human beings involved in the labor, (ii) the importance of volume of food is often ignored, (iii) the manner in which a consumer comes to purchase the food is avoided, and (iv) the act of consumption of local food is assumed to change the entire food system (Mariola, 2008). The conclusion of his article is that there is both a lack of local infrastructure to make local food sustainable in terms of energy and that the entire food system is inextricably linked to the fossil fuel system, so much so that any consumer choice cannot change the level of sustainability.

While the local food movement touts the increased sustainability of “going local,” there is no empirical data that backs up claims that local has a lower carbon footprint. What local food systems do contribute to sustainability are providing fresh food to more people, keeping money in the local economy, and fostering closer relationships between producers and consumers (Mariola, 2008). A questionable claim made in the literature is that local food creates a more equitable marketplace by “rejecting the hegemony of the conventional food system” (Mariola, 2008). However, what is clear is that whether choosing local or conventional food, our food system is linked to the fossil fuel system and it is nearly impossible to effectively reduce our carbon footprints at the market.